What An Nollaig Means to Us

At Bitesize Irish, we help people throughout the year to learn and to practice speaking Gaeilge (the Irish language). We’ve stepped back as a team, and thought what An Nollaig (Christmas) means to us!

I was staying at my grandad’s house for Christmas, in Tralee, County Kerry. He was a native of Kerry. To the best of my understanding, he would drive a milk truck, collecting milk from farms and delivering it to the creamery in Dingle (An Daingean) in Kerry. It’s at the creamery where my grandmother worked and where they met. He spent years away from Kerry (in England and then Dublin). But Kerry was his home and I suspect he was happy to be back there. These days, there is a small brewery in that creamery. I was visiting the brewery once and only when I was inside I realised its significance to me.

It was Christmas Eve and I was probably 6 or 7 years old. I was lying in bed, my three sisters in the same room. We were giddy for Santa to come. It was my strongly held belief that he was going to land on the roof of the small house with his reindeer. My bed was by the window. Every couple of minutes, I would open up the curtains to look out but nothing unusual was on the roof. Sleep must have gotten the better of me, but not for long, haha! By about 4am I was up with my sisters enjoying the gifts that Santa had brought.

Childhood memories of Christmas time are etched indelibly into my memory. As a family, we stayed faithful to the tradition of abstaining from doing anything festive before the 8th of December; the Roman Catholic feast of the Immaculate Conception. As soon as the 8th was reached, however, I was very excited to erect the manger, or nativity scene as you may call it, and hang up the tinsel.

That did not stop me, however, from deliberating for weeks on the best and most reasonable requests to Santy and a letter to the North Pole would be attempted several times before getting it just right. The dearest memory of all, however, are the trips to midnight Mass and seeing houses and farm sheds lit up like cities on the way there and back.

The sky was often clear enough to see the big bright moon and I often thought I caught a glimpse of Santy and his sledge passing across it. I can still feel the excitement and wonder I felt when I saw the high neon star shining brightly away in the distance on a midland plain. 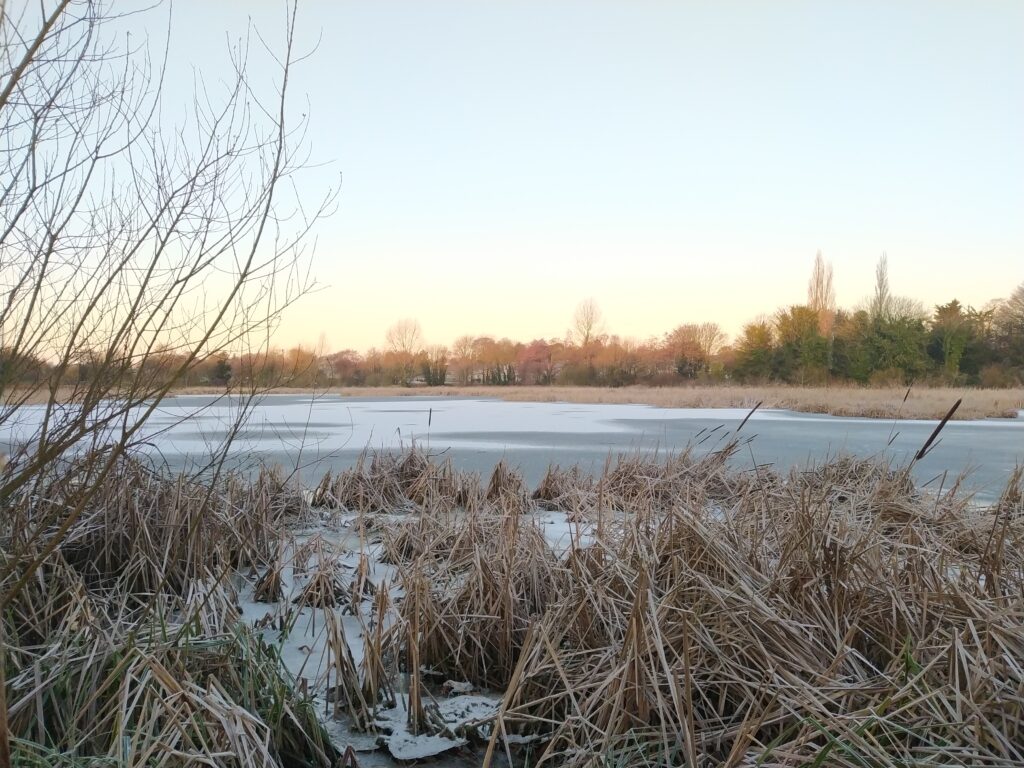 I’ve spent the last few Christmases abroad since I moved from Ireland to Germany but my last Christmas in Ireland is one that was a little bit different from previous years. It was always a tradition that my grandparents spent Christmas morning with me, my parents and my sister in our house. We would prepare a buffet-style breakfast and enjoy exchanging gifts, chats and laughter before saying our goodbyes and visiting other family members throughout the day. We decided to change that tradition a few years ago and we went to their house instead and my grandmother suggested we visit her neighbour across the road. I had met this neighbour a few times, an older man who lived alone with his son, but I hadn’t seen them for a few years so we were delighted to get the chance to say hello again.

We were warmly welcomed and they were surprised to have visitors so early on Christmas Day. As we stood in the kitchen waiting for the kettle to boil for some tea, the father whispered to his son who then disappeared into another part of the house. He quickly returned with a wine bottle that had the labelling and stickers peeled off and a little piece of paper stuck to it with the handwritten word ‘poitín’ on it. I had never seen poitín in my life, only heard of it! They wouldn’t reveal the source but insisted we all had a shot of it to celebrate Christmas. The two men were pioneers themselves and didn’t drink alcohol at all so it ended up being myself, my parents and grandparents warming our throats with a shot of poitín while the two men warmed theirs with a nice cup of tea. A very happy Christmas it was indeed although next time I’ll wait until after my breakfast to visit them!

All of my Christmas Days – bar one – have been spent in my family home. As the youngest in a large family, what I remember most is the kitchen and living room being crowded with people as it was the one time in the year when everybody would get together.

There was lots of everything: lots of cards around the house, lots of people, lots of decorations, lots of food, lots of presents, lots of noise and music, lots of clearing up afterwards. As the years went on some of my brothers and sisters started having Christmas with their own families, so the home place was a little bit quieter and more sensible. And when I left home, Christmas became as much about catching up with old friends as it was about family, but I still always spent Christmas in the house I grew up in, just with five for dinner instead of fifteen.

For the first year of the Covid-19 pandemic I was living in London, and as numbers increased in December I realized I would have to cancel my plans to travel and experience my first Christmas away from home. It wasn’t so bad: I cooked a traditional roast turkey dinner, and even made some wheaten bread to have with smoked salmon as a starter. I watched the Muppets’ Christmas Carol during the day and spent the evening on Zoom calls with friends and family. It still felt like Christmas Day, but I wouldn’t do it again. This year, having left London and returned to Ireland, I’m happy to say I’ll be back with my family in the house I grew up in for Christmas.