To Be Irish in Florida

By The Byrne Brothers

The Byrne Brothers are a Family Band from Dublin who moved to Donegal for a few years and now live in Orlando Florida. They are all County Champions of their Traditional Irish Instruments, Duo and Trio Champions and Ulster Champion Irish Dancers. Even their Dad Tommy was Dublin Champion on Bagpipes back in the day and now plays with them on Guitar, Uilleann Pipes, Fiddle Whistles and Bagpipes.

In 2015 The Byrne Brothers shot to fame in Ireland (after auditioning along with 10,000 other kids) and getting on The Late Late Toy Show, Ireland’s biggest TV Show… every Irish kids dream.

In 2016 a video of them playing on the street at the Fleadh went viral with 3.4 million views and was the most viewed video from Ireland in 2016. In 2017 they performed at America’s most famous Irish Pub – Raglan Road Irish Pub and Restaurant at Disney Springs for their St. Patrick’s Festival. 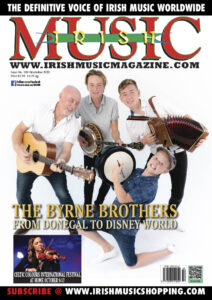 They got approved for their US green cards through their “Extraordinary Ability in the Arts” in August 2017, sold their house in Donegal in December and were on a plane in January 2018 to start their new life in America. Once there, they took up residency in Raglan Road for 6 months where they became the youngest ever Cast Members of Walt Disney World.

​They have a new CD called “Living the Dream”  with 6 original tracks (which is getting amazing reviews from all over the world), and you may have seen them on the front cover of The Irish Music Magazine in November! They are also avid Photographers and Videographers as you can see from their Facebook Page.

​“Our plan is to continue Living the Dream – traveling the world with our music, showing our culture and learning of others, surfing the coolest beaches and having the most amazing adventures.”