For the Carty family, Christmas became a little different when they relocated from Sandycove, County Dublin, to the Swiss canton of Zurich in 2018.

First up, Santa Claus became Samichlaus, pronounced ‘Sammy Claus.’ Like Santa, he traces his origin to Saint Nicholas, the fourth-century Greek bishop of Myra in present-day Turkey. But unlike the Irish Santa, he does not wear jolly red robes and scoot about the skies in a sleigh packed with presents drawn by a herd of reindeer.

Instead, dressed in austere robes, he arrives on a donkey that has hauled him through the snow from his remote mountain hideaway. The most you can hope to get from him is a nut, a mandarin, some gingerbread or a chocolate.

Moreover, he’s accompanied by Schmutzli, an unkempt, shaggy-haired gurrier with long dark robes and a broomstick that he uses to whip naughty children. Either that or he’ll stitch them up inside the sack on his back.

In any event, Samichlaus and Schmutzli have already been and gone, their mission complete on 6 December, the Feast Day of St Nicholas. The Carty’s Christmas season actually began back in November when they watched the Lucy lights – 2,000 clear and coloured crystals – being turned on in Zurich’s Bahnhofstrasse. And as the aroma of hot chestnuts (heisse marroni), glühwein and fondue wafted in the winter sky, they watched Frau Holle cover the mountains in snow and listened to the singing Christmas tree.

That said, the festive season in Zurich by no means over. On the last day of the Christmas term, Fred and Grainne will awaken their youngest child at 5am in order to have him at his lakeside primary school by 6am. Shortly after his arrival, all the children in the school will begin wandering around the village, making as much noise as possible by banging pots and pans together. After an hour of this early morning hullabaloo – known as Schulsilvester – there are further frolics, including a dance-off, before the children return to their parents, suitably exhausted on day one of the Christmas holiday. Meanwhile, their elder children, being at secondary school, will have been up half the night after they and their classmates gathered around a firepit in a nearby forest.

All going to plan this Christmas, the Carty’s will be home for the first time since 2018. ‘I’m so looking forward to reuniting with family and friends,’ says Grainne. ‘Mixing up the Christmas cake, the flame on the plum pudding, pulling crackers, board games and laughing into the small hours. And then on Stephen’s Day, we’ll blow away the cobwebs with a walk in Phoenix Park to see the deer, or maybe the beach at Malahide.’

‘The children are super excited to go back. They’ll obviously be running downstairs, hoping that Santa has come but, if they didn’t get a present, I think they wouldn’t mind so long as they get to see their cousins. All they want is cuddles with their grandparents and Granny’s hot chocolate. It really puts everything into perspective.’ 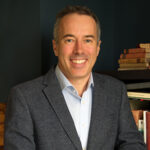