There cannot be many daughters who care for their 91-year-old mother by making sure that she goes to work every day but then not many people are fortunate to have an “Irish mammy” like mine! At the age of five, Margaret Sherlock decided to give herself a haircut with a cutthroat razor one day when everyone was out in the bog cutting turf. It was the start of a lifelong obsession with hairstyling. Growing up in a thatched cottage with few facilities in the 1930s in the hills of Monaghan, I will never know how she got the idea to be a hairdresser. The youngest of six sisters, she was left without a mother at the age of five and with my grandad working in America, it was left to my Aunt Annie, aged just 18, to bring up the girls.

In 1945, as a fifteen-year-old, she cycled daily to her hairdressing apprenticeship in Aughnacloy County Tyrone, a round trip of almost twenty miles, having earned her fees by scrubbing and polishing floors. There were no wages so she made money by smuggling eggs and butter from the farm which she sold to local shops as food was in short supply post World War Two. She also trained as a nurse in Omagh as hairdressing jobs were few and far between unless you could afford your own business. 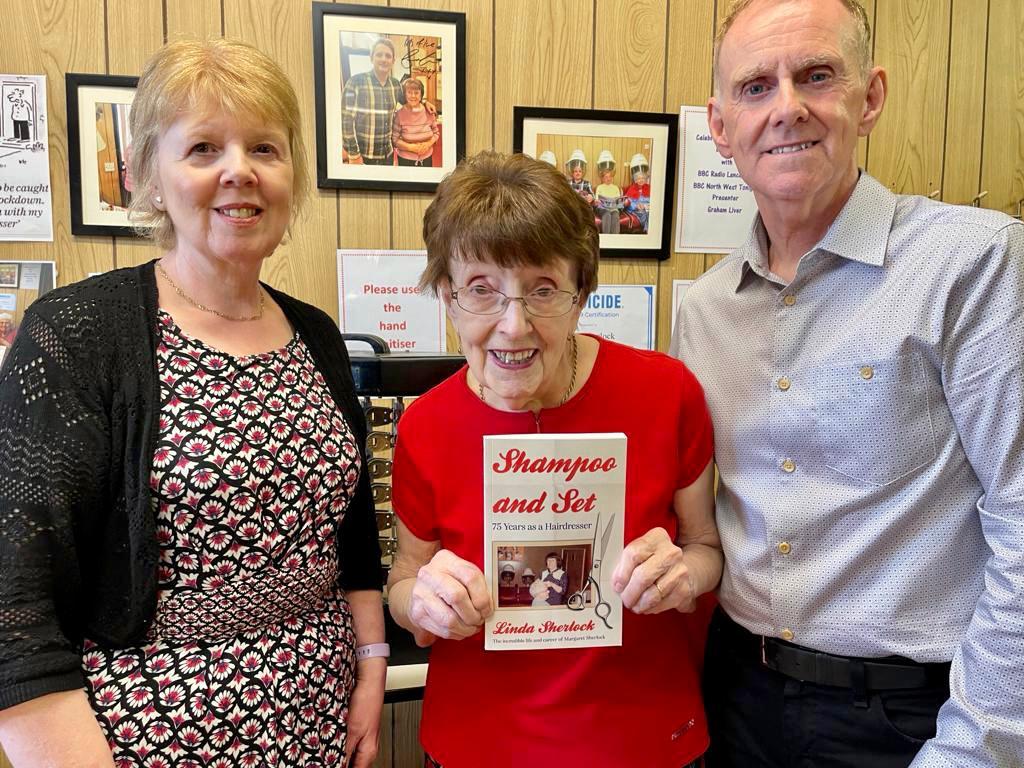 Having met my dad Frank at a dance in Carrickroe Hall, she followed him to the Lancashire mill town of Chorley where they married in 1954. Just two years later, she opened her salon “Hair by Margaret” in the front room of her terraced house. She has been there ever since and is now the UK’s Longest Working Hairdresser.

In June this year, she celebrated 65 years in business and has been hairdressing for 75. Covid restrictions limited celebrations but that didn’t stop her becoming a media star! To mark the occasion, I achieved my ambition of becoming an author and published her story “Shampoo and Set 75 Year as a Hairdresser.” Our relatives in Ireland received complimentary copies and what a buzz we created!

Although we have kept in touch over the years through letters and telephone calls in between visits, now 21st century technology helped to spread the word. We had great craic the day Martin and Annette Logan from Sky TV’s “The Irish in the UK” came to film. The next day it seemed everyone in Monaghan had been tipped off to view it! My cousin Peter spotted us on the news and his brother Felix could hardly leave the house without being questioned about his famous aunt.

Most of all, it brought us all together as messages bounced to and fro across the Irish Sea. Our Irish family across the generations have a record, complete with photographs, of a life in exile in England and lasting memories of my mum and dad which I hope will never fade.