I’m not exactly sure when the idea came to me, but it was probably during a walk along the prom during the winter of 2020, on those dark evenings I’d walk from Galway out to Salthill and listen to podcasts, while being battered by gales coming in off the Atlantic.
Salthill was quiet then, lockdowns had made the usually bustling walkaway eerily quiet, as I looked across Galway bay, out to sea or over to the Burren of North-West Clare, lights of houses or of ships visible out in the inky blackness, I thought to myself why couldn’t I do this, ask people about their lives, their passions and more importantly, why hadn’t anyone done this for the West Coast? 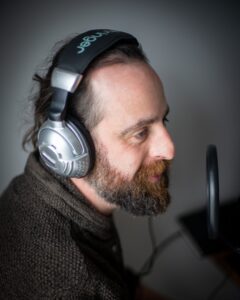 For the life of me I couldn’t think of anyone else that did a podcast that shone a light, solely on the West of Ireland and I thought who better to fill this hole than us. The ‘us’ being myself and my co-host Lavin. A good friend and great character, he had originally started out as my guinea pig, being an artist and musician of great talent, I thought who better to interview. Over a test run, recorded during a pandemic stifled Lady’s Day during the Galway Races, we soon realised our chemistry would lend itself well to the show and he was drafted in full time.

The next obstacle was a big one and one faced by us all during those years, Covid. We were adamant from the outset, the podcast was to be recorded in person, none of this zoom or teams craic, real people in the same room talking, that’s what usually happens in a snug and that’s what we wanted for the podcast. And so the waiting game began, we would schedule interviews with guests, but a travel ban or positive test would scupper our plans and on it went until the fog lifted and the country moved into its post pandemic life, with that we began our work in earnest.

First up was Eamon Healy, his work as a historian on 19th century Galway painted a harrowing picture of the hardships of the time that really brought the period to life, while his current work with Ancestry as a genealogist unveiled that vital work they do, often reuniting families separated due to emigration or adoption after decades. After that we had Marc Jennings from Castlebar, the man behind the amazing aerial photography of upintheeire. The west coast of Ireland is his main inspiration, and his humour, insights and amazing photos lent itself to great chat. Up next was Eimear Finan, a Galway City main stay, she is a theatre maker who’s new play ‘Tart’ ran in the Mick Lally theatre in last year’s Galway Theatre Festival. She regaled us with stories ranging from New York to the cobble stones of Shop Street and everything in between.

As the year has progressed we’ve had street artists, senachai, DJ’s, poets and everything in between, all are welcome into the Shnug.